The Origins Of Krampus The Christmas Devil 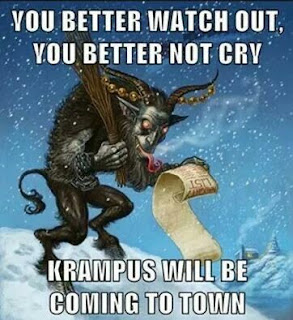 Now that we are fully immersed in the holiday season and I have spent more time than I care to admit watching sickeningly sweet romantic Christmas movies on the Hallmark channel. That said, I thought it would be a great time to step away from the hot cocoa and candy canes and delve into the dark origins of Krampus.

What could be more exciting for children around the world at Christmas time than waiting for Santa! The jolly bearded rosy cheeked man, who slides down chimneys, reads the letters left by hopeful children next to a plate of cookies and milk, along with carrots for his reindeer. Ultimately, children will be rewarded with their long wish lists, but only if they had good behavior all year long, because remember Santa can see if you're naughty or nice. 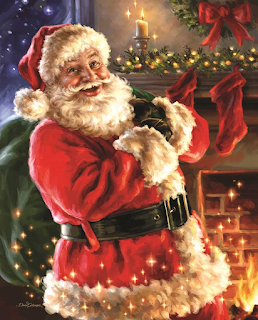 It wasn't until a few years ago that I learned about the opposite legend of Santa Claus, and his name is Krampus. A goat demon (I know, I know, a demon at Christmas, stay with me we are just getting started!) instead of rewarding children that were good this year he punishes the ones that were bad!! Ok so you are probably thinking, that's no different from Santa Claus who leaves coal in their stockings instead of presents. Well, no, that's not exactly Krampus's idea of a punishment. He kidnaps tortures and mutilates them. 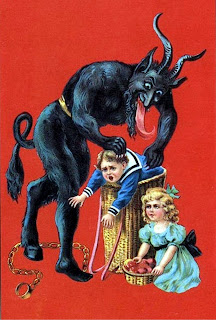 Krampus has been around for hundreds of years and is still celebrated across Europe today. Krampus, ie "Krampen" is derived from the German word "claw", Krampus is a half goat half demon who lives in Hell. Krampus is usually covered in brown or black fur, with goat hooves and horns on his head, an extremely long tongue, and razor sharp fangs. He carries chains, which he swings around for good measure. He sometimes attaches bells to them, to feel more festive, or so they say. 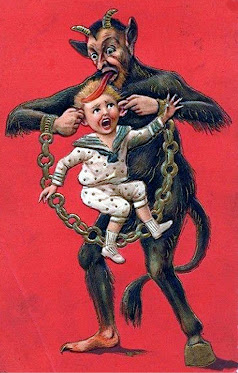 I find this particularly interesting. Imagine you are a child and hear the sounds of sleigh bells and sneaking downstairs to catch Santa in the act of leaving you presents, only to find a goat demon in your living room waiting to punish you. According to pagan tradition, which is where his legend began, Krampus would beat the naughty children with birch rods, but when it came to the terrible kids, the ones who had true evil in their hearts, they got a much worse punishment. Like Santa Krampus carried a bag on his back, but he didn't stuff it with toys and candy. He stuffs his bag with the worst behaved kids and drags them back to home in Hell, and it's there that he either eats them, tortures them, burns them alive or drowns them. It is unclear how he decides on the correct punishment none the less I'm sure he takes much pleasure in the process. 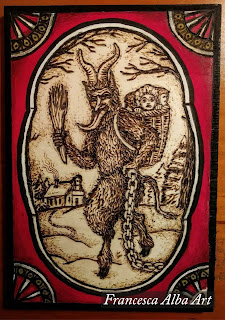 Why would Krampus become the mascot for Christmas as opposed to jolly St. Nick? Well, the answer is simple. He's not a replacement for Santa Claus, he actually works alongside of him along and is actually four of his possible companions. Depending on what part of Europe you are from. You might believe in Knecht Ruprecht, St. Nick's manservant who carries a staff and a bag of ashes to assault children with if they don't know their prayers. 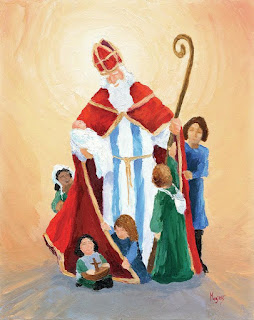 You also may believe in Bel Snickle, who was most recently seen in modern day tv shows like the office or as part of the Schrute family. Bel Snickle is bearded and wears different types of furs while rewarding the good kids with candy and nuts and once again hitting the bad kids with sticks. 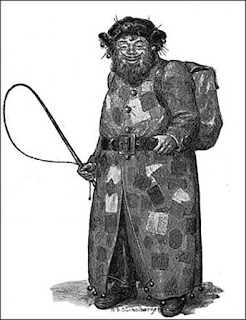 The last of St. Nick's companions is Zwarte Piet, which translates to Black Peter. Black Peter is St. Nick's servant and like the men before him, he too would beat the bad kids with sticks, however in the 20th century this was altered and he became a friendly character who gave out candy.

Now let's dive into a few of the origins and celebrations of Krampus. Krampus is celebrated across Europe. However, the exact location of where he comes from is still highly debated, although Austria has become a big contender.

The consensus is that many experts have come to is that he is a Pagan God,who played an important part of the winter solstice festival. Later, his image was changed by the Christian Church to represent the devil. 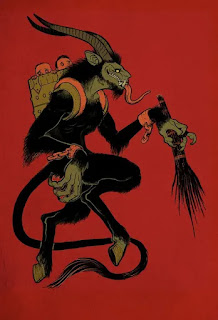 The issue I have with this is, during the 12th century, the Christian church tried to ban Krampus celebrations because of his resemblance to the devil.

So, if that is true, then that means the church took Krampus's image and made it representative of what their concept of true evil looked like.

The church would then declare to the people that they couldn't celebrate Krampus because of the resemblance that "THEY" were responsible for. 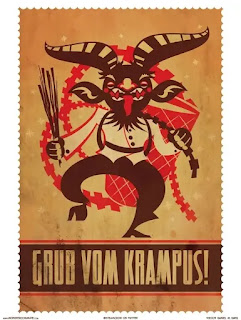 Regardless, the celebrations of Krampus did not stop, and by the 17th century, they would work him into Christian celebrations by making him St. Nicholas's opposite. That is the entire reason there is a Krampus. He is the dark to Santa's light, the yin to his yang. As with many things, you cannot have one without the other, the Saint to the Devil.

There is an interesting theory that Krampus did not carry chains until the Christians finally accepted him and the chains represent the binding of the devil.

Krampus and The Christmas Witch Theory 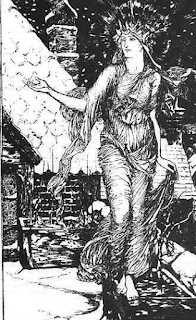 There is another theory as to where the Krampus lore began. One popular belief, at least here in America is that Krampus is a relatively modern concept (beginning around the 17th or 18th century) and does not have pagan origins.

It also states that there’s also no evidence showing Krampus has a connection with Christmas. The thinking is that Krampus most likely derives from Frau Perchta, a Winter Germanic goddess who is a blend of good and evil. Also known as Frau Holle or Holda, she is a woman of duality and can materialize in two different forms.

Frau Perchta appears to well-behaved children as a beautiful and kind woman who leaves silver coins in their shoes.

However, for children who misbehave, she manifests as a terrifying hairy demon who would slice open children’s bellies, extract their innards, replace them with hay, dirt, trash, or rocks, and stitch it closed again. It’s been said her breath is so bad it causes blindness.

Perchta frequently traveled with Alpine spirits called Perchten. Perchten were guardian spirits long before they were Christianized. These spirits had two different types called Schonperchten, who were kind and lovely, and Shiachpercht, who was more sinister and appeared as half-goat, half-demon. Im not opposed to this legend, as you know I love a good witch story! 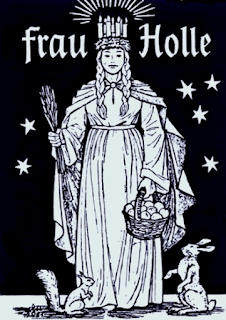 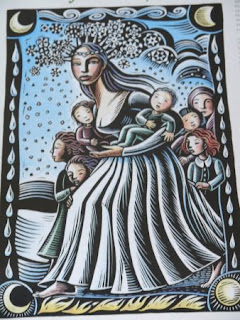 Krampus night is celebrated on December 5th. On that night, someone will dress up as Krampus and visit different businesses and homes around town. Sometimes he's accompanied by St. Nicholas and sometimes he is not. While St. Nicholas is busy handing out candy to the good kids, you guessed it, Krampus is focusing all of his attention on the bad ones. He will hand out pieces of coal, bundles of sticks and will not be afraid to use them. Fear not, the welts only last the night. 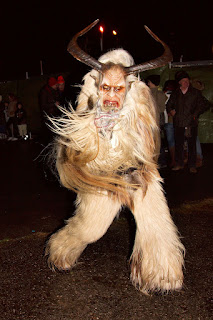 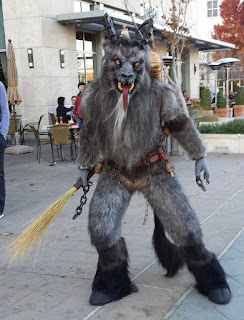 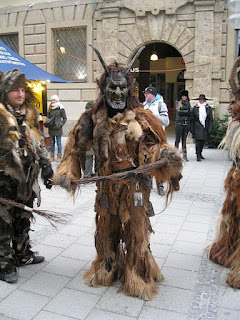 Depending on the particular town, there can be multiple Krampus roaming the streets and most of them are drunk, because it is customary for the adults to give the demons schnapps. 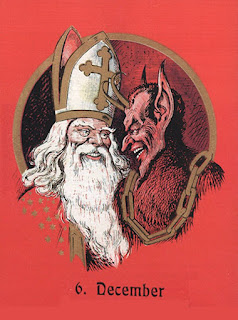 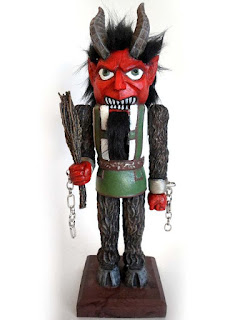 The Christmas Devil is just as alive and well today
as is his jolly other half. As he is now a cultural icon and can be seen in various movies and television shows. It was only a matter of time before he made his way across the pond and into the souls of Americans everywhere. Krampus taps into our subconscious, deepest, macabre desires. So if you need a touch of darkness during this bright time of year. Just listen for the sleigh bells in the dead of night. It might just surprise you who it is that is staring back at you in the dark. 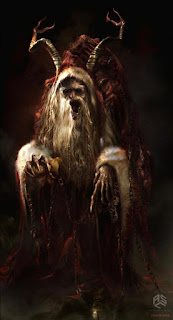