The Beautiful Ghost That Haunts The Empire State Building

The year is 1947 and 23 year old Evelyn McHale is taking a lonely ride in the elevator of the Empire State Building. Her destinatin is the observation deck. There are many thoughts running through her mind, too many. 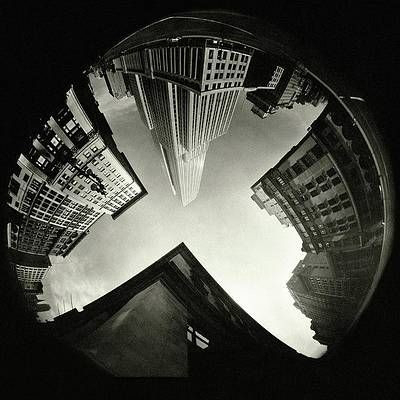 Evelyn was born in Berkley California. Her childhood was comfortable, but by the age of seven, her parents divorced and her once stable world came crashing down. Evelyn's father was granted custody and they moved to Tuckahoe, New York. 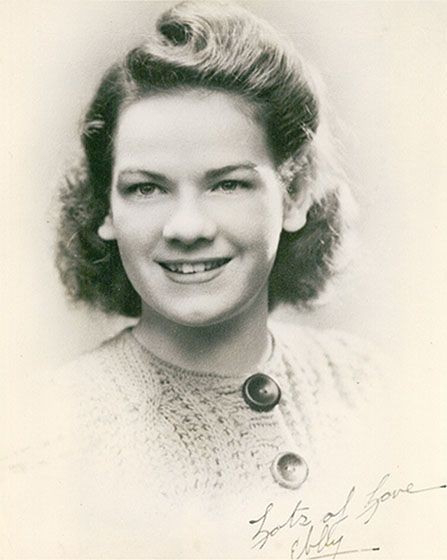 After graduating from high school Evelyn joined the Womens Army Corps, later she moved to Baldwin New York and began a career in bookkeeping for an engraving firm.  During this time she met a young man who would soon become her fiance, her future was looking bright and she couldnt have been more happy. 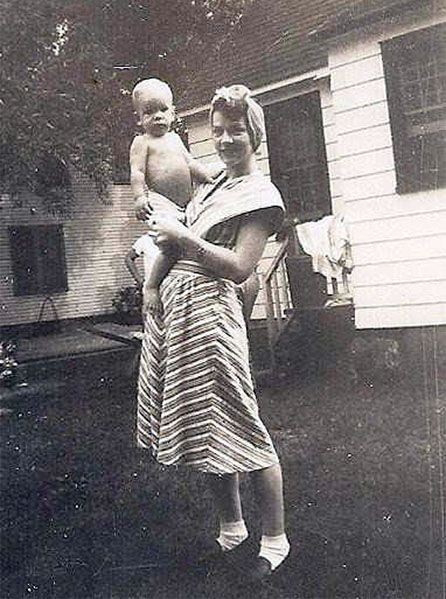 On May 30th she went to visit her fiance at his home in Pennysylvinia. We will never fully know what eventsunfolded during her overnight stay, if any. But something we do know is that something certainly had occured in Evelyns mind that fateful night. The next morning she caught a train back to New York. 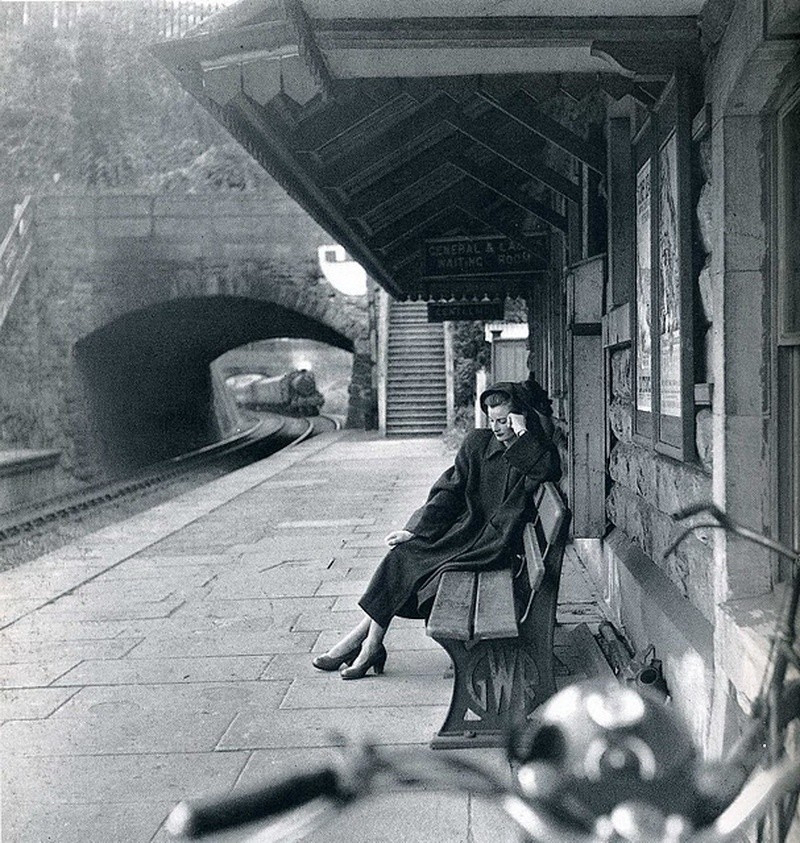 Dressed in her most elegant dress and wearing her new white silk scarf, white gloves and a pearl necklace, Evelyn made her way to where many people plan a leasurely sightseeing tour, The beautiful Empire State Building.For Evelyn sight seeing was the last thing on her mind. I often wondered while researching this case, if anyone had noticed Evelyn that day, if they saw the saddness in her eyes or the dispair on her face. Sadly it might have been the look of firm resolution that caused no one to think a tragedy was about to occur. 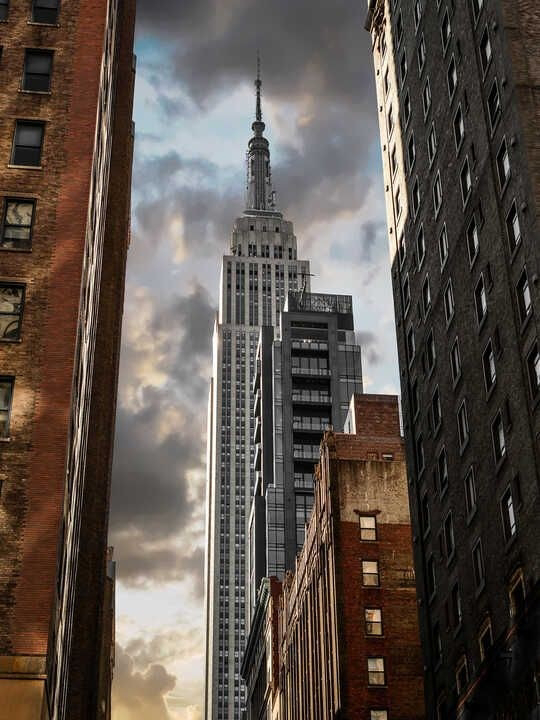 Once she reached the Observation Deck, Evelyn noticed there were quite a few people gazing at the amazing views of the city from such a mesmerizing height. No one really took much notice as Evelyn joined in at looking at the large amount of New Yorkers below, going on about their day. 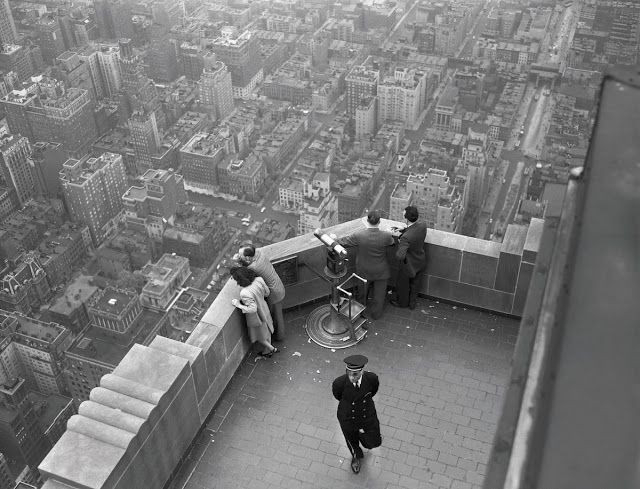 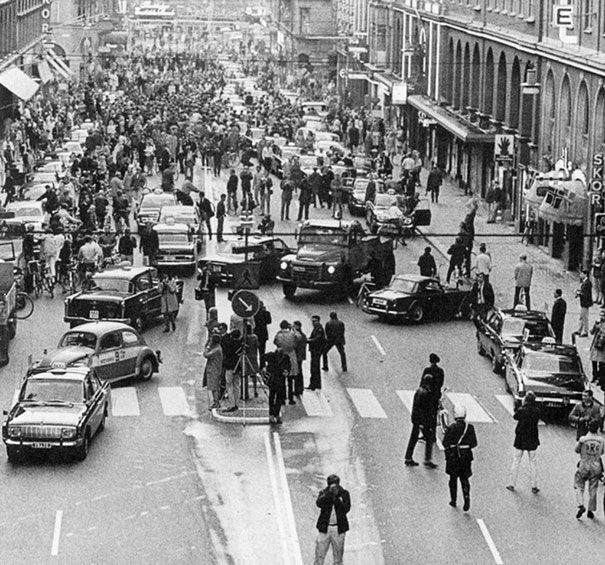 Evelyn carefully removed her coat and neatly folded it, next she placed her black pocket book on top of her coat. At 10:40 am Patrolman John Morrissey, at 34th aand 5th Avenue reported seeing a white scarf floating lazily down from the heavens. Moments later this peaceful, dreamy scene was brutally interrupted by a heart wrenching boom.  It took a few moments for the horrified pedestrians to realise what had just happened. Evelyn had just jumped 1050 feet to her death or 86 stories. Miraculously no one on the ground was killed or injured. She had landed squarely on top of a United Nations Assembly Cadillac limousine. 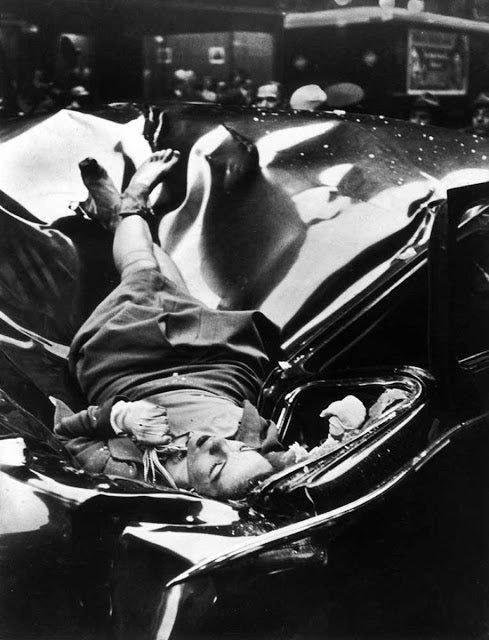 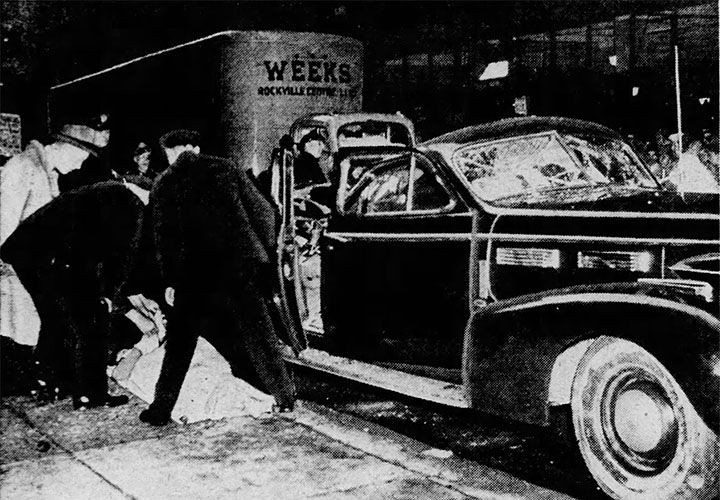 Almost as if directed by fate, across the street, stood a young photography student named Robert Wiles, momentarily transfixed by the scene, he ran over to where  Evelyn lay, to take what would be one of the most poignant and surreal photos of American history. That same week "Life Magazine" published the photo, the caption read "At the bottom of the Empire State Buliding the body of Evelyn McHale reposes calmly in a grotesque bier, her falling body punched into the top of a car." Evelyn's gloved hand appears to be serenely touching her pearl necklace, and her legs crossed as if taking a nap. 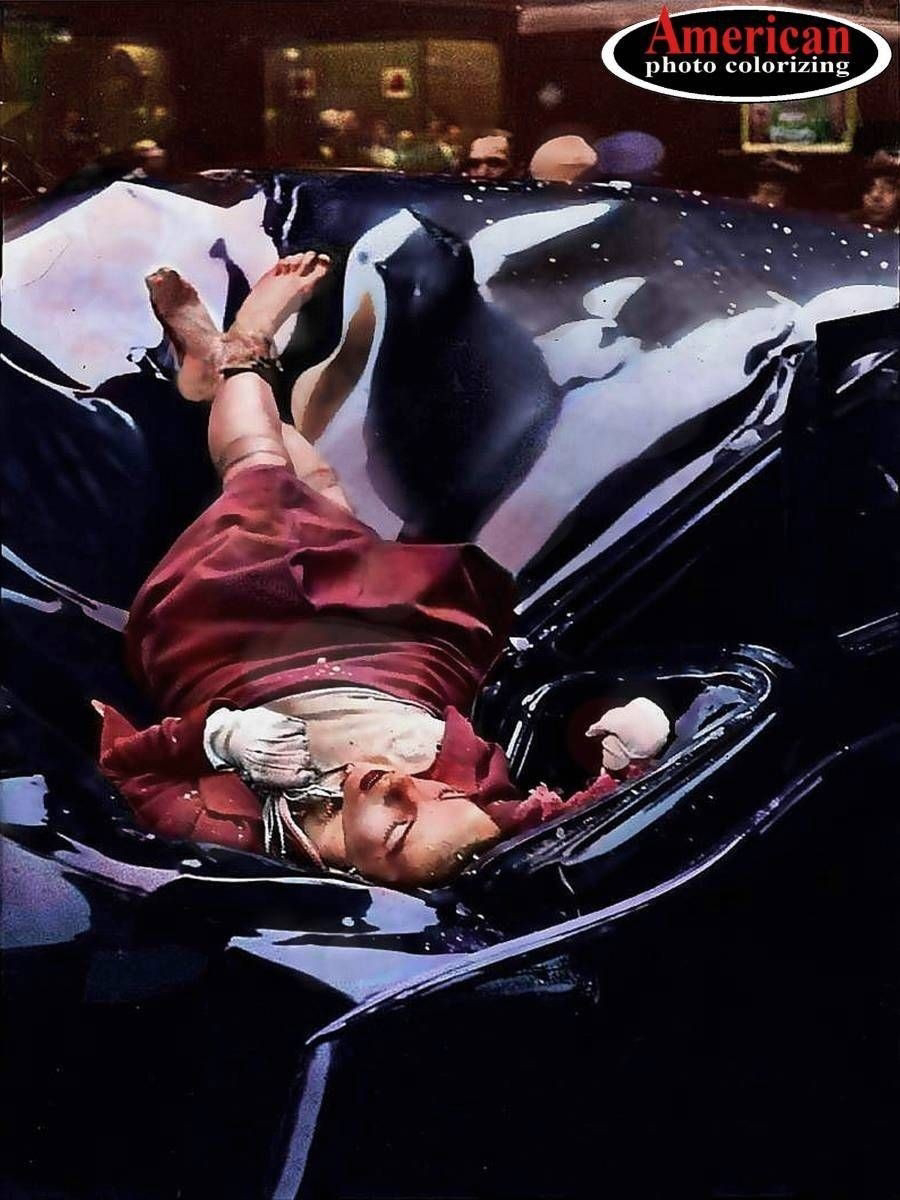 Evelyn had left a suicide note, that was found in her purse which was found on the observation deck. In it she wrote " I dont want anyone in or out of my family to see any part of me. Could you destroy my body by cremation? I beg of you and my family. Dont have any service for me or remembrance for me."
The following paragraph about being an unsuitable wife for her fiance,  Evelyn had crossed out before ending the note with a message for her father.
"My fiance asked me to marry him in June. I dont think I would make a good wife for anybody. He is much better off without me.  Tell my father, I have too many of my mothers tendencies." 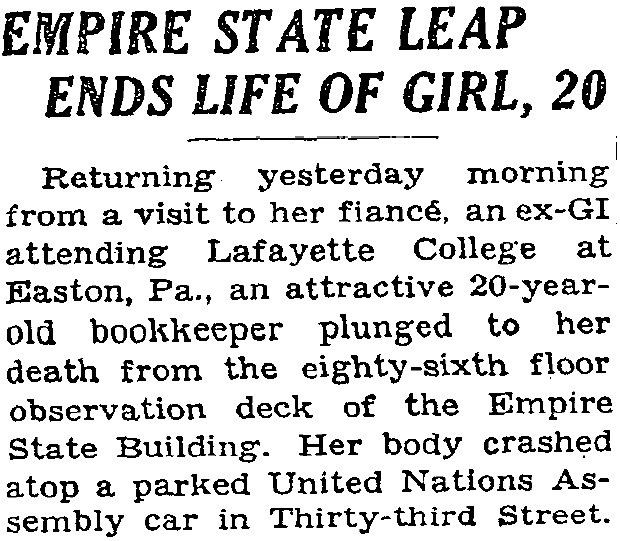 There have been many reported sightings of her on the Observation Deck. Visitors have claimed to have seen a young woman dressed in clothing from the 1940's and wearing bright red lipstick, the distressed woman is seen pacing the Observation Deck on the 86th floor. With her cheeks stained from tears, her ethereal form paces the deck with a sad expression on her face. After a few minutes of this back and forth she suddenly runs to the edge and right through the saftey fence and over into the edge of the black abyss of eternal night.  Her last memory of 1947 is replayed like a ghostly recording, for those she chooses to show her eternal echo. 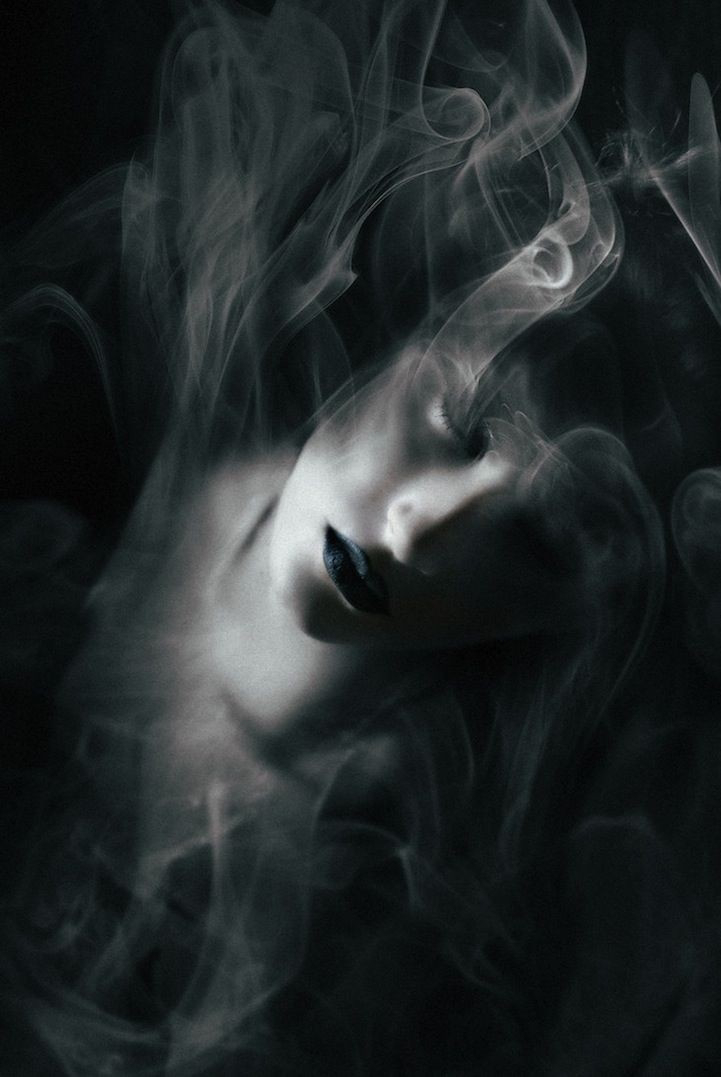 *Evelyn's fiance, Barry Rhodes was quoted as saying, "When I kissed her goodbye she was happy and as normal as any girl about to be married."
*The driver of the United Nations Assembly Cadillac Limousine was not in the car when Evelyn made her jump. He had just moments before left the car to buy something from a drug store.
* Since the Empire State Building was constructed in 1931 some 36 people have jumped from the building, including 17 from the 86th floor observation deck. 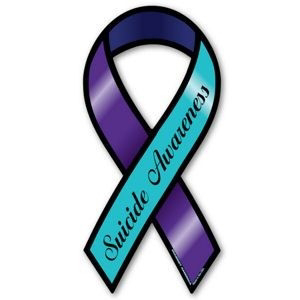