The Mystery of The Highgate Vampire. "Audio Version Available On My Podcast" 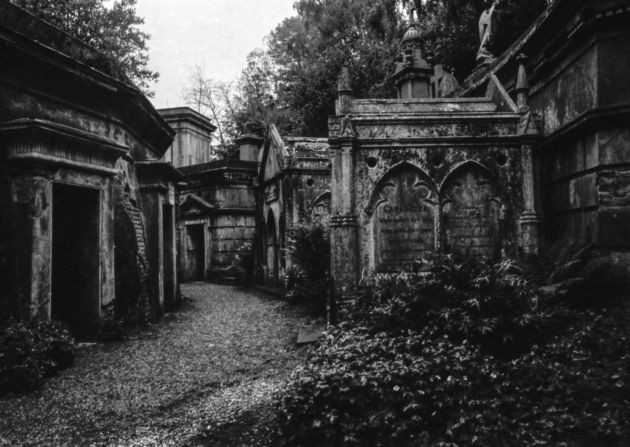 What if I were to tell you of a place that is so mysterious and gothic, that it has endless rows of silent stone angels that appear to watch your every move. With overgrown ivy that windes up and down the decrepit tombs of the over 170,000 dead, and shrubs once meticulously cared for, now take on a wildness of their own. Only to be surrounded by a never ending sea of trees that seem to come to life at night, and their leaves whisper tales of men dressed in dark robes, practicing dark rituals, ghosts wondering around the graveyard. Along with one famous vampire that waits for his next victim in the dark of night. However the most magnificent feat of nature is the enormous Cedar of Lebanon tree that predates the cemetery by 50 years, it is over 300 years old and stands majestically with its far reaching branches overseeing all of the spirited happenings. Welcome to North London England and the famous Highgate cemetery!

The eerie activity can be traced back to local rumors of a property that once was home to a grand estate that saw its fair share of tragedy and was said to be haunted and stood empty for many years. One of the earliest ghost encounters was in 1808, according to legend the ghost came to be known as "the top hat ghost."

In May of 1839 Highgate cemetery was opened, it sits on top of a hill that looked over the city and well above the soot and grime of the day. At that time the city's population was at an all time high with a death rate that was growing higher and higher by the minute. People were being buried in shallow graves around town and covered with a thin layer of lime. As you can imagine the smell of rotting flesh soon became a problem. As a solution seven private cemeteries were built around London and became known as the "Magnificent Seven." Highgate became the third cemetery in line and it was decided that it would also become a peaceful sanctuary.

During the victorian era their attitude towards death was more about presentation and show, which made Highgate the the most fashionable place to be buried. With that Victorian train of thought huge gothic tombs and mausoleums were errected. By 1854 the grounds were becoming over crowded so the grounds were expanded and 20 more acres were added.

After WW1 and WW2 the cemetery fell into ruin and became abandond due to not only war but because cremation was now more cost effective. In 1960 the gates to one of the most sought after cemeteries was now closed. The once beautifully maintained grounds became overgrown, headstones were overturned, the gothic mausoleums were now cracking and falling down on top of each other. Many of the grounds became the backdrop for multipule horror movies.

It is said that the haunted activity can be traced back as early as 1808 with one of the cemeteries most famous ghosts which has become known as the top hat ghost, who can be seen roaming around the graveyard during the witching hour.

In 1963 there is a story of two 16 year old girls who were walking home at night after visiting a friend and to get to their homes they had to pass Swain's Lane which is directly past the cemetery. The girls reported, that as they passed the gates of the cemetery they whitnessed bodies coming out of their tombs. Another couple reported something hidious hovering behind the gates iron gates. They both stood there frozen fear for several minutes. As time went on more and more people reported this same specter floating above gravestones. Many of them contacted the local paper, soon animals were showing up drained of blood and then the phantom became described as a vampire.

Enter the famous Vampire of Highgate, legend has it that the vampire was a medieval nobleman who who practiced black magic from Romania. The coffin was brought to England from Europe around the 18th century. His faithful followers then purchased him a home in the West end of London. He was eventually buried at the site that would eventually become Highgate cemetery. According to further lore he remaind asleep until Satanists preformed a dark ritual that woke him up. The vampire is a dark figure with red eyes that slowly roams through the cemetery, and when the tempature drops you know he is near. Do not get caught in his stare, its hypnotic and can send chills straight through you. However its not just humans who fear him, its also all animals in the arear that have been known to succumb to his evil that lurkes within him. Many animals especially foxes have been found dead on the cemetery grounds. Only the brave dare to spend a night in the cemetery.

In 1969 a group of people who were intreseted in the occult and the legends that surround Highgate cemetery did just that, and decided to spend the night in the cemetery. They claim to have seen a grey figure floating around along with the tall man with a top hat, a woman in white and a ghostly face with red eyes glaring at them through the gates of the cemetery.  As word spread of the the strange happenings "vampire hunters" soon converged on the graveyard at night. Soon tombs would be overturned and bodies were turning up with wooden stakes in their chests. Stolen corpses were found in random places. One stange account by a local was that f a headless body propped up behind the steering wheel of his car.

This soon became known as the Highgate Vampire Sensation and at the center of this famous mystery are two self proclaimed dueling magicians named David Farrant and Manchester. David Farrant was a local man with an intrest in the paranormal and was the head of the british Psychic and Occult Society.  He spent many nights in the cemetery and claimed to catch a glimpse of a grey figure which he claimed was of supernatural origin as well as a ghostly cyclist, a woman in white, a figure wading in a pond and a pale gliding entity. Farrant however never claimed to see the vampire in which he feverishly sought after. Sean Manchester was another local man with an interest in the supernatural as well. Manchester claimes that a "King Vampire" of the undead was buried in the graveyard.  It was Manchester that told the story of the vampire being an aristocrat and a practitioner of black magic. As well his reawakening due to satanic rituals. However he never did supply evidence that would support his claim.

Their feud began with each claming that they would be the first to find and kill the vampire.  Manchester announced an official vampire hunt on friday the 13th. A local Thames TV program ran a segment on the unfolding saga the night before the scheduled hunt, and that night swarms of "hunters" with homemade stakes broke into the locked cemetery, so many infact police were unable to control the out of control mob.

It was decided that the two magicians would settle their feud with a "magician's duel" however that never took place. In 1973 Sean Manchester caimes to have driven a stake through the vampires heart in the nearby "House of Dracula" which is in Couch End. David Farrant was later arrested in the churchyard next to the Highgate Cemetery with a crucifix and a wooden stake and in 1974 he was jailed for damaging memorials and the desecration of human remains. Through all of this mayhem neither magician found the infamous vampire, although many graves were ransacked and real corpses were staked and beheaded.

Both men have written a variety of books and their feud remained in full force with vendictive and petty back and fourths that continued until Farrants death on April of 2019.

It would be strange if tales of ghosts and, monsters and other supernatural events didnt attach themselves to cemeteries. Tales of the paranormal are often connected to our hopes and fears about death, and whats more death related than a graveyard full of hundreds if not thousands of burials? However most cemeteries are peceful and quiet, they can be a place full of history but mostly contemplative. But in the middle of the night when theres noone else around and you feel like your being watched remember, you have entered their domain and you just might never leave or you are already one of them.