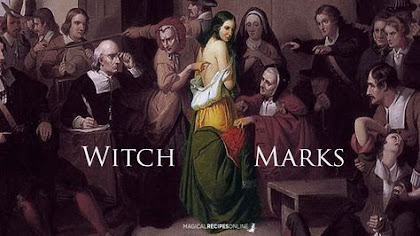 The year was 1692, and 13 people had been hanged for witchcraft in Salem, Massachusetts. It was a matter of concern to Colonel Bucks, of Bucksport, Maine, that his own village should be just as vigilant in stamping out witches. He raised the question repeatedly at town hall meetings. Shortly his one-man crusade produced a victim. 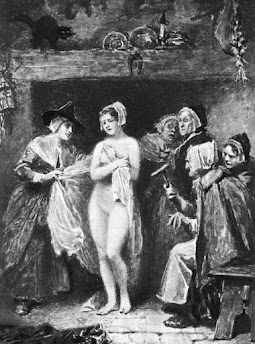 There was a public accusation of a bent and withered old lady who looked every inch a witch. Historians disagree as to her name and age, but one of them calls her Comfort Ainsworth and is sure she was more than 90 years old.
Because of her obvious frailty, the old lady went on trial without torture or pricking with needles to find "the witch's mark". But the crowds that surged into the courtroom knew her guilt had been predetermined by Colonel Bucks humself, who sat within whispering distance of the magistrate. When witnesses took the stand against her, without exception they looked to Bucks for approval. 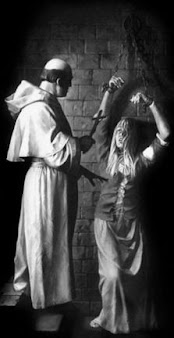 One woman said she had heard the old woman muttering something that sounded gibberish. But when she reached home and her ears started bleeding, she knew it had been a curse.
A man swore he's seen a black-garbed figure ten feet tall - obviously the devil or one of his henchmen - standing in Comfort's doorway.
The jury quickly returned a verdict of guilty. Quoting the text, "Thou shalt not suffer a witch to live," the judge denounced Comfort Ainsworth and sentenced her to hang next day.
No one was prepared for the scene that followed. Becaused she had not been permitted to testify in her own defence, people had assumed that the toothless old woman would remain mute.
Before the bailiffs could stop her, she got to her feet and pointed a bony finger at the colonel. "In all my life," she screamed, "I have cursed no other being! But I am capable of laying a curse on you, sir, because you and your toadies have lied me to the gallows! 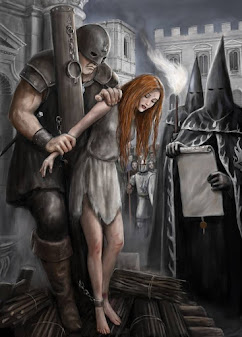 "Then mark you this, and mark it well - when you go to your grave, which will be soon, I pledge you I shall leave the print of my foot o your gravestone. And the print, Colonel Bucks, will be there forever so that the world can never forger this day!"
A bailiff clapped his palm to her mouth and carried her from the courtroom. But her words left the village uneasy, and there were few spectators when she was hanged, even Colonel Bucks failed to appear. 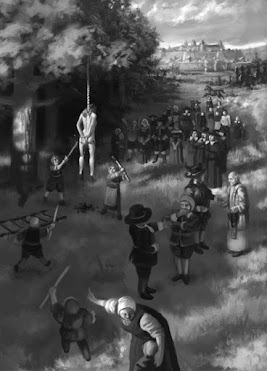 Three months later, he died from a "wasting disease", and the colonel's heirs found he had written a new instruction into his will. His headstone must be of the most flawless marble, "incapable of being stained or besmirched".  In a few days the relatives were secretly approached by a terrified cemetery worker. He had found a woman's footprint in the marble, and no amount of sanding could remove it.
A new stonecutter was sworn to absolute secrecy. Working in the dead of night, he cut a marker that was an absolute replica of the first. The old stone was buried secretly and the new one raised.
Ten days later, the heirs saw crowds of frightened people moving in and out of the cemetery. Joining them, they found that the trick had failed. The shape of an old woman's narrow stockinged foot was clearly visible in the new stone.
Publicly deploring the phenomenon as an act of "graveyard vandalism" - an explanation that convinced no one - the heirs had a still more costly headstone hauled to the cemetery. It was raised with no attempt at secrecy. Incredibly, the print of Comfort's bony little foot soon began to take shape in the stone. This time his discouraged heirs made no effort to replace the marker. Nearly three centuries later it stands over the grave of Colonel Bucks, the footprint still scarring its surface like a wound that will never heal. 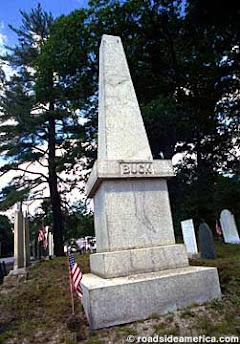 After doing some digging into this legend I had a few questions that needed answering and here is what I found.
1) No witches were ever put on trial in Maine
2) Colonel Buck was a Justice of the Peace; he didn't have the authority to burn anyone
3) Colonel Buck was born in 1719, long after the last witch was killed in America (and no witches were ever burned in America)
4) The stain appears on a monument erected in Colonel Buck's memory 75 years after he died on March 18, 1795.