George Gaffney was a petty thief. He operated from London's seedy Soho red light district in the early years of this century. His crimes were all minor, except for one - and that was the most serious of all. On the first day of March 1910, Gaffney saw on a street-seller's cart a strange three-foot long length of woven silk rope which he recognised as a "thuggee cord", used by the Hindu assassins' sect in the Middle East to dispatch their victims. 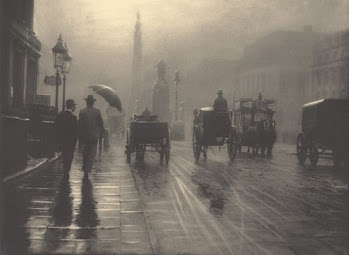 Gaffney bought it. Two weeks later, he used it...The cheap thief had been having problems with a girl named Bessie Graves, who expect him to marry her because she was pregnant. Bit Gaffney had wooed her under the alias of Arthur Eames. Now he had found a much more promising opportunity - an elderly rich widow, named Stella Fortney.Called by an hysterical landlady, Scotland Yard detectives found Bessie Graves with the strangler's cord drawn so tight around her throat it was embedded in the flesh. Their only clue was that the probable strangler was a man who called himself Arthur Eames. 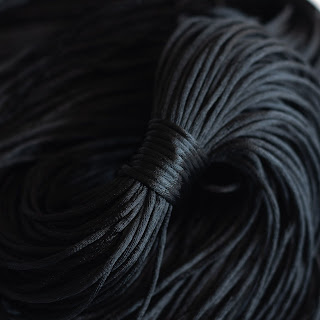 It was little for the Yard to go on, and three weeks later Gaffney was still at large pursuing his romance with the widow.It occured to him one night that he would make a more impressive appearance if he called on the lady in a hansom cab. A second later he was screaming. In the half-light of the closed vehicle, George found Bessie Graves sharing the seat with him. The dead girl's eyes stared glassily into his, and the swollen tongue lolled from her mouth. 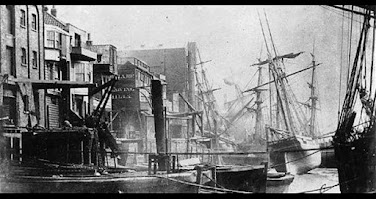 For more than a week Gaffney drank steadily, then he went to see Stella. She was far from friendly that evening, but melted when Gaffney gave her a stolen diamond ring. They shared a bottle of champagne, after which she sent him to the cellar for another. Bearing the kerosene lamp, Gaffney was halfway down the steps when Bessie Graves climbed out of the darkness to meet him.She had succeeded in loosening the strangler's cord, which swung from her throat like a necklace. But the staring eyes were worse. Screaming Gaffney threw the lamp at her and crashed headlong to the bottom of the stairs.Gaffney spent three weeks in hospital. And when he left he decided that he had only one chance if throwing off the ghost who would not leave him alone. If he put England behind him forever, perhaps Bessie Graves would remain there, too. He booked passage on the liner Montrose, for Quebec.With renewed hope he checked into a small hotel on the eve of the voyage. In the semi-gloom of the room, the saw Bessie again.This time she had freed herself from the silken noose and was holding it out to him. Feebly, he took it from her clawlike fingers. When he lifted his eyes again, Bessie had vanished. But the message was obvious. Gaffney sat down and began to scrawl his confession. 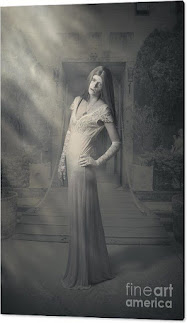 He told in detail of Bessie's murder and of her successive visits from the tomb. And now, he said, there was no possible escape. 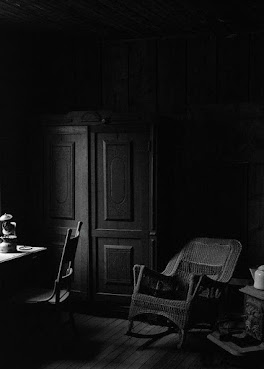 Called by hotel staff, men from the Yard broke into Gaffney's room. They found the thief hanging from the beam. They read his confession and agreed at once that the case of the Soho strangler was closed.
Yet there was one element of the case that puzzled them. For the first time, a vital piece of evidence had vanished from the Yard's thief-proof vaults. It was the thuggee cord - the same cord that Gaffney used to hang himself in the closet. -
A few random facts about the lore of knotted cords:
Knotted cords have been found under houses, often with pieces of hair or fingernails. Clearly, they were used as curses. These 'wresting threads' were spun from black wool. Cutting the knots off would release the victim from the curse.
People have also, used knotted ropes/cords as protection against witchcraft.
Knots have been tied into the clothing of the dead, before burial, to stop them wandering about. Several accounts exist of ghosts been exorcised by the simple process of exhumation, and knots being re-tied.
Sailors used to tie knots into rope in windy weather to 'catch the wind'. Knots would be untied when the vessel became calmed, hoping to release the wind.
Witches would sell such prepared, knotted ropes in sea towns.
It is said that in a seance situation, you can release a trapped soul into the wind by unknotting a rope.
Lastly, when outside if you time it right, you could actually cause the wind to blow by unknotting  a rope.